“Is it Cruel to Have a Monkey Helper?” Yes.

A recent article in The Atlantic asks the question, “Is it Cruel to Have a Monkey Helper?”

We say yes, of course it is.

The recent article focuses its attention on the non-profit group Helping Hands, the only organization in the United States that trains, what they refer to as, “monkey helpers” at their “Monkey College” in Boston, MA. 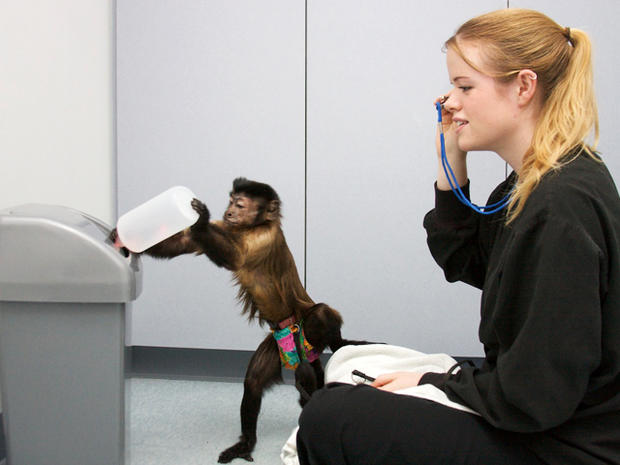 After facing extreme levels of scrutiny and criticism from concerned individuals and groups like Friends of Animals and Primarily Primates during the late 80’s and early 90’s, Helping Hands now goes to great lengths to keep its cruel training methods and internal workings hidden from the public. We revisited the organization in an article last year, “Monkey See, Monkey Forced to Do” and found that many of the disturbing training techniques are still being utilized.

Repeated attacks on trainers and patients by the capuchin monkeys in the program were reported during 1989 after a zoologist who supervised the training of monkeys for Helping Hands came forward and in one interview, explained “These animals, and their human patients, are being totally exploited for a futile and dangerous program.” Disturbing and painful training methods were also disclosed…with previous employees of Helping Hands testifying that electric shock packs were attached around the monkey’s waist during training and “delivered the equivalent of the charge felt in a typical electric cattle fence” to the monkey whenever it performed an action deemed undesirable by trainers. Painful and deforming full-mouth dental extractions were also performed on the capuchin monkeys after incidents occurred involving monkeys biting their owners and trainers.

Although Helping Hands insists some of their practices have changed, the root of the problem is that capuchins are a highly social species, it is only natural that problems occur when they are forced to spend their lives in almost complete isolation from monkeys like themselves.Katherine MacKinnon, an anthropologist and capuchin expert at Saint Louis University, explains in The Atlantic article that the animals are being asked to live in “a human-constructed reality that is anathema to how they have evolved and how they deal socially with their surroundings and own species.”

It is a travesty that this organization continues to exist and still tries to convince the public that high-energy, curious, extremely intelligent primates are an acceptable service pet for people with paralyzing disabilities, despite the fact that their needs could just as effectively and easily be met by the use of robotic equipment.

Click here to read our full coverage about Helping Hands and if you would like to take action against the exploitation of primates in the medical field, please consider making a donation to our sanctuary, Primarily Primates, which cares for over 300 animals that have been freed from abuse.